Sadly my hope to start a Tale and encourage others to join in hit a few snags.

For one, it wasn't good timing for others. I'm hoped given no one can do much of anything right now it may have been a nice distraction but one of my friends had moved house a while back and hadn't yet unpacked his warhammer stuff (cos why bother when you can't play anyway) and another had been experiencing some back pain that ruled out painting.

Despite this I still had a well of enthusiasm so blasted through my first batch then ordered the second... and waited... and waited... and waited... it seems my decision to throw a can of spray paint on the order (that I didn't even need for this project but another one) meant they were waiting till they had it in... and each week they just put the expected delivery date back a week. Eventually I emailed them and cancelled the spray paint but by then my momentum was lost and the models sit there built but unpainted to this day.

Thirdly, I had a planned story arc in mind, and upon reading up on the strengths of armies in 9th edition on behalf of a friend who is considering re-entering the hobby, I realised my planned story based pivot would see me collecting arguably one of the worst armies in the game. Now I'm not the most competitive player by far, but I still like to have a fighting chance. And running an army I can just expect to get steam rollered every time I play, WHEN I can finally play... just didn't sound fun.

So I'm putting that project on the backburner. If a guard codex drops and makes conscripts good (or better yet gives rules for penal legion) I'm well placed to continue the theme that way. If a GSC codex drops and lifts them to even remotely mod table, I know my next phase is a bunch of bikes as the rusted claw and the orange penal outfits work well together. Those conscripts can be brood brothers. In the meantime, I shall try my hand at a few other projects and put my efforts into planning a Tale for those guys next year, where hopefully with enough forward planning we can actually get it going this time.

But for the sake of getting it written down, here is how I saw the background story going for my force.

Mackay stared down at the report, head in his hands. "When I said I needed the finest soldiers the Imperial Guard had to offer, I was thinking Catachans... tough guys who can handle anything, including this lot. Guys who could arm wrestle the riot squad and probably win! The strings I pulled to get my request noticed, and this is what they send me?!?"

Mackays assistant took a deep breath, poising himself for reprisals "Yes that would seem to be the issue Sir... you pulled too hard. Normally a request like this would reach a quartermaster and they'd know precisely what you meant, but with the added urgency you imparted to it, the request ended up on the desk of a general, so he sent you what he considers the best... the ones who lap up all the glory... the ones all the stories are written about, the songs are sung about..."

"Well, best go inspect our new arrivals" Mackay straightened his cap and marched out to the front of the compound just as two very fancy, heavily armed, decorated and altogether far too clean troop carriers showed up.

The Tempester Prime was the first to disembark, and waved his swagger stick around emphatically as he got his men to line up "Move it move it move it... Proctor, get my set square, if one man in this line is even so much as a degree out of true I will make his life a living hell!"

Mackay looked across the troops, at the boots he could see his face in, and decided to put in an order for more body bags.

The story was going to be about adding some rough riders to the force, and Mackay wanting them kept an eye on. There would be two squads (identically equipped but modelled differently) one of guards, carrying shotguns, another of convicts, carrying close combat weapons.

Phase 4 - as yet undetermined, but all 4th generation GSC miniatures. Maybe a squad of Restraint.

The story would have revealed the previous warden as a high ranking member of an established genestealer cult who had infiltrated the prison to begin the cycle anew. There would have been a titanic battle between the two halves of my force, but the imperium would seem to prevail. Although Mackay, upon his reassigning to another regiment, would end his transmission with a quote by the four armed emperor. 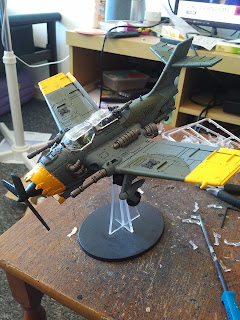 Blood Axis: The Wail of Jericho 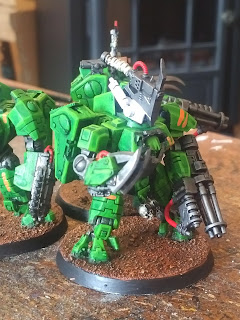